Citizens participation meetings will be held at Bessemer City Hall, 1700 Third Avenue North, on Tuesday, February 18 from 6 p.m. to 7 p.m. and on Wednesday, February 19 from 10 a.m. to 11 a.m. END_OF_DOCUMENT_TOKEN_TO_BE_REPLACED

The city of Bessemer has approved its 2020 Transportation Plan.

The plan was adopted by the Bessemer City Council on Tuesday, August 20. It was prepared by STRADA Professional Services and the EEFS Company, P.C.

The plan addresses road projects city leaders deem as important to economic growth and safety and that are eligible for state funding.

The Alabama Rebuild Act, passed earlier this year by the Alabama Legislature, increases the state’s gas tax for the first time since the 1990s. Beginning September 1, drivers will pay an extra six cents at the pump, followed by increases of 2 cents in October of both 2020 and 2021.

As part of the Act, the state will implement the Alabama Transportation Rehabilitation and Improvement Program II, or ATRIP-II. The Alabama Department of Transportation will make available between $30 million and $50 million a year in grant funding for designated road projects in counties and cities throughout the state. The maximum award for a county or municipality is $2 million.

Jurisdictions are required to adopt a Transportation Plan by August 30 in order to be eligible for the grant funding.  The grant funding will be done on a competitive basis and will be awarded by an ATRIP-II committee
based on factors such as economic growth and safety.

National Night Out set for August 6

The city of Bessemer Police Department will host the annual National Night Out in Bessemer on Tuesday, August 6, 2019 at the Bessemer Recreation Center, 100 14th Street South.

The event will take place between the hours of 5 p.m. and 8 p.m. There will be free food, drinks and popcorn. School supplies will also be given away.

National Night Out is an annual community-building campaign that promotes police-community partnerships and neighborhood camaraderie to make our neighborhoods safer, more caring places to live. National Night Out enhances the relationship between neighbors and law enforcement while bringing back a true sense of community. Furthermore, it provides a great opportunity to bring police and neighbors together under positive circumstances.

For more information on the event in Bessemer, contact Police Sgt. Alexia Bruister at 205-417-3900.

Published with permission of The Cutoff News.

Volunteers from the Bessemer Historic Society showed up to help begin the cleanup and restoration of the Lincoln Theater in downtown Bessemer on Saturday, July 13th.

The Bessemer Historic Society volunteers removed almost a complete dumpster full of garbage from the once majestic theater. They swept the floors and removed a lot of dust that has built up over the years.

Benjamin and Connie Hancox of Standard Furniture provided lunch from Bob Sykes for the volunteers. Glenny Brock of the Alabama / Lyric Theater was on hand to guide in the cleanup efforts. Ann Griffin of Hueytown also dedicated to helping with the cleanup.

The Lincoln Theater was built and opened in 1948, with seating provided in orchestra and balcony levels. It catered to African-American audiences. It was closed in the late-1970’s.

The theater was purchased in 2017 by award-winning actor and Bessemer native Andre Holland and is being restored by his non-profit Holland Project, established in 2018.

Vendors along Second Avenue North in Historic Downtown Bessemer are preparing for a day of fun in the sun with an Old School Summer Block Party scheduled for Saturday, June 8.

The festivities will begin at 10 a.m. on Saturday and last until 8 p.m. The event will be sponsored by The Paisley Pig, LLC. The event will feature food trucks and street vendors. There will also be storewide specials at the Paisley Pig and at United Textiles.  Admission is free to the event.

Get your tickets now to experience a “taste” of Bessemer’s finest restaurants and businesses.

The Fifth Annual Taste of Bessemer and Business Expo returns to the Bessemer Civic Center on Thursday, April 11, 2019.

Bessemer Area Chamber of Commerce president Latasha Williams said the Taste of Bessemer allows restaurants and other businesses in the city an opportunity to showcase their products to potential customers.

“This event gives attendees an opportunity to come and see some of the businesses that make Bessemer great,” Williams said.

Over 100 vendors participated in the event in 2018, marking four straight years of vendor and attendance growth at the Taste of Bessemer.

The deadline for sponsors and vendors to register is Thursday, April 4. Advanced tickets can be picked up through April 9.

For more information, contact the Bessemer Area Chamber of Commerce at 205-425-3253 or see the flyer information below.

Please join volunteers from throughout the Birmingham-Hoover metro area for the 2019 Biannual Valley Creek Clean-up, slated for Saturday, March 16. The event will start at 8:30 a.m. Efforts in Bessemer will kickoff at McNeil Park, 1931 13th Street North. Other locations in the metro area for the Clean-up will include the Five Points West Library in Birmingham at 4812 Avenue West; Lipscomb City Hall at 5512 Avenue H and Oak Grove Memorial Park at 9180 Lock 17 Road. The Valley Creek Clean-up will focus on public awareness and trash removal along roadways and from waterways throughout the Valley Creek Watershed. Valley Creek has been a valuable natural resource for cities in west Jefferson County  throughout their history. Valley Creek begins under downtown Birmingham (close to UAB Hospital) and flows west to the Black Warrior River. The watershed for Valley Creek is a part of Bessemer, Birmingham, Brighton, Fairfield, Hueytown, Lipscomb, Midfield, North Johns, Pleasant Grove, and Sylvan Springs and covers about 257 square miles. Valley Creek provides aquatic habitat to numerous animals and continues to improve, but it needs your help. For more information on how you can be involved in the Bessemer event, contact Mr. Freddie Freeman at 205-565-9697. 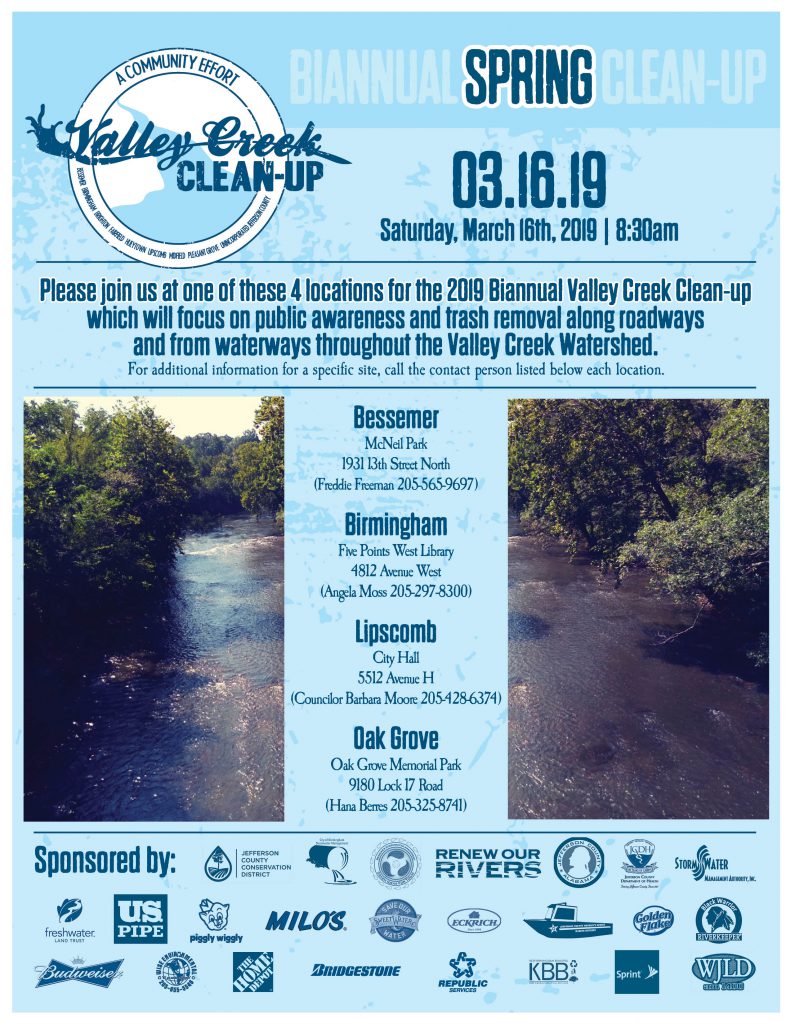