Smithsonian traveling exhibition on display at The Bessemer Public Library

Bessemer, Al |October 8, 2021] — Water/Ways, a Smithsonian traveling exhibit, winds its way into town for an extended exhibition from October 18th through November 19th at the Bessemer Public Library. Bessemer is one of just five locations statewide to host Water/Ways, which will be permanently retired at the end of this tour.

The exhibit reveals how our waterways are critical to the past, present and future of our state. Alabama is home to 132,000 miles of rivers and streams, and 3.2 million acres of wetlands. These waterways connect us to nature, nurture our cities and culture, and can either unite or divide our people and communities.

“Being a host location for this Smithsonian Institution Exhibition is a great opportunity for the Bessemer Public Library as well as the City of Bessemer and Jefferson County. This opportunity will provide the library and its patron’s exposure to high quality museum exhibits right in their local library and will also increase the knowledge of the Water/Ways that supply our region. We are honored to host Water/Ways and thankful for the opportunity to provide this amazing experience to our community.” Omar Chapman, Administrative Assistant.

The Smithsonian exhibit will be complemented with plenty of local programming for audiences of all ages. Special events during the exhibit’s run include specialized youth programs such as Grab n’ Go Art Craft bags for families, Grab n’ Go Coloring Activities for kids and a water drive to assist our first responders. Guest speaker will be available on the dates listed below.

Brought to ’Bama by the Alabama Humanities Alliance

“What’s so powerful about Water/Ways is that it shows how water doesn’t just shape our landscape. It shapes our lives,” says Chuck Holmes, executive director of the Alabama Humanities Alliance. “This exhibit

is a chance for folks in communities statewide to see a Smithsonian-quality exhibit up close. It also offers us a chance to reflect on how our local waterways affect how we live, work, worship, create and play.”

For more information about Water/Ways, the public can visit www.BessemerLibrary.com or call for information at (205) 428-7882. The Bessemer Public Library is open Monday – Friday from 9:00am – 6:00pm

The Bessemer Public Library, Staff, Board, and community envision a future in which: Everyone can enjoy an intellectual and culturally rich life. Our community celebrates and appreciates diversity. Our staff finds value in their contribution to the mission. Our facilities will be welcoming and comfortable spaces for all. Learn more at www.bessemerlibrary.com

About the Alabama Humanities Alliance

The Alabama Humanities Alliance is a state affiliate of the National Endowment for the Humanities. Our mission is to foster learning, understanding and appreciation of Alabama’s people, communities and cultures. The ultimate goal: To use the humanities to bring Alabamians together and make our state a better place to live. Learn more at www.alabamahumanities.org

The event is being sponsored by the Bessemer Police Department.

National Night Out is an annual community-building campaign that promotes police-community partnerships and neighborhood camaraderie to make our neighborhoods safer, more caring places to live. To learn more about National Night Out, click the following link: https://natw.org/.

This year’s event in Bessemer will include food, drinks, popcorn, music, inflatables, school supplies and more. The event is free to the public.

(Note: The August 3 Bessemer City Council meeting will be postponed until Tuesday, August 10 to accommodate this event). 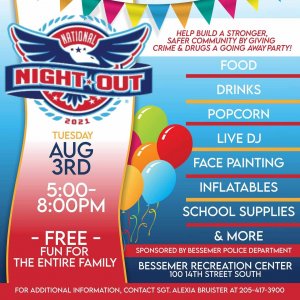 The city of Bessemer’s Annual Independence Day Celebration will return in 2021!

The celebration will take place on Saturday, July 3, from 6:30 p.m. to 9 p.m. at the Bessemer City High School campus, 4950 Premiere Parkway, Bessemer, AL.

The event will include music, giveaways and a fireworks show which will start at approximately 8:45 p.m.  Pyro Shows of Alabama will provide the fireworks display.

The event is being sponsored by the City of Bessemer in partnership with the Bessemer Area Chamber of Commerce. A special thanks to the Bessemer Board of Education for use of the school campus.

See the flyer below for more information. 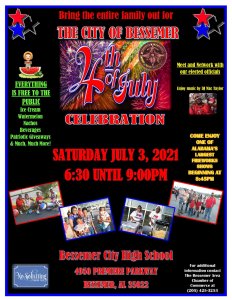 The 2020 Bessemer Christmas Parade has been canceled

The city of Bessemer has approved its 2020 Transportation Plan.

The plan was adopted by the Bessemer City Council on Tuesday, August 20. It was prepared by STRADA Professional Services and the EEFS Company, P.C.

The plan addresses road projects city leaders deem as important to economic growth and safety and that are eligible for state funding.

The Alabama Rebuild Act, passed earlier this year by the Alabama Legislature, increases the state’s gas tax for the first time since the 1990s. Beginning September 1, drivers will pay an extra six cents at the pump, followed by increases of 2 cents in October of both 2020 and 2021.

As part of the Act, the state will implement the Alabama Transportation Rehabilitation and Improvement Program II, or ATRIP-II. The Alabama Department of Transportation will make available between $30 million and $50 million a year in grant funding for designated road projects in counties and cities throughout the state. The maximum award for a county or municipality is $2 million.

Jurisdictions are required to adopt a Transportation Plan by August 30 in order to be eligible for the grant funding.  The grant funding will be done on a competitive basis and will be awarded by an ATRIP-II committee
based on factors such as economic growth and safety.

The Alabama State Council on the Arts has awarded the Lincoln Theater, located in Historic Downtown Bessemer, a $21,000 design grant. END_OF_DOCUMENT_TOKEN_TO_BE_REPLACED

Published with permission of The Cutoff News.

Volunteers from the Bessemer Historic Society showed up to help begin the cleanup and restoration of the Lincoln Theater in downtown Bessemer on Saturday, July 13th.

The Bessemer Historic Society volunteers removed almost a complete dumpster full of garbage from the once majestic theater. They swept the floors and removed a lot of dust that has built up over the years.

Benjamin and Connie Hancox of Standard Furniture provided lunch from Bob Sykes for the volunteers. Glenny Brock of the Alabama / Lyric Theater was on hand to guide in the cleanup efforts. Ann Griffin of Hueytown also dedicated to helping with the cleanup.

The Lincoln Theater was built and opened in 1948, with seating provided in orchestra and balcony levels. It catered to African-American audiences. It was closed in the late-1970’s.

The theater was purchased in 2017 by award-winning actor and Bessemer native Andre Holland and is being restored by his non-profit Holland Project, established in 2018.

The city of Bessemer and the Bessemer Area Chamber of Commerce will host an Independence Day Celebration in the city on Thursday, July 4, 2019.

The celebration will take place at Bessemer City High School, 4950 Premiere Parkway. Festivities will start at 6:30 p.m. and last until 9 p.m., with the annual fireworks show scheduled for approximately 8:45 p.m. Pyro Shows of Alabama will conduct the fireworks show.

The celebration will include music by DJ Mac Taylor 98.7 KISS FM. There will be free ice cream, watermelon, nachos and beverages. The Chamber of Commerce will sponsor free giveaways.
0

Vendors along Second Avenue North in Historic Downtown Bessemer are preparing for a day of fun in the sun with an Old School Summer Block Party scheduled for Saturday, June 8.

The festivities will begin at 10 a.m. on Saturday and last until 8 p.m. The event will be sponsored by The Paisley Pig, LLC. The event will feature food trucks and street vendors. There will also be storewide specials at the Paisley Pig and at United Textiles.  Admission is free to the event.