Officials with the city of Bessemer and the Bessemer Airport Authority broke ground Tuesday morning on construction of a 14,220 square foot hangar project at the Bessemer Municipal Airport.

The $750,000 project is being funded by the combination of a grant from the Alabama Department of Transportation (ALDOT) and a loan from Cadence Bank. Garver Inc. is providing project management and design, while Wayne Davis Construction will serve as the general contractor.

The project will include 10 individual T-hangars with large opening doors to accommodate Cirrus aircraft. Construction of the hangers is expected to be completed by December, said Tim Wasyluka, Airport manager.

City officials hailed the groundbreaking as another milestone in the city’s economic development efforts. The Bessemer Municipal Airport is a public-use airport and is categorized as a reliever airport for the Birmingham-Shuttlesworth International Airport. Several companies and private jets currently lease or own hangars at the airport.

Bessemer Mayor Kenneth Gulley said the airport is becoming an important piece of the city’s industry recruitment efforts. In past years, city and airport officials have been able to market the airport and its location in the region to prospective companies such as Steyr Arms USA.

The hangar project will only aid those efforts, city officials said.

“We want the airport to grow and this is the first step in growing it,” said Bessemer councilwoman Donna Thigpen, who represents the city on the authority’s board.

Construction of the hangars is the latest in a series of recent upgrades at the facility. In June, the Federal Aviation Administration (FAA) announced the Bessemer Airport is in line to receive $2,277,393 to rehabilitate the airport’s runway and runway lighting.

Last fall, Birmingham-based Sanders Capital Partners announced that it had acquired three corporate hangars at the Bessemer Airport for $1.3 million. Jackson Stewart, general counsel for Sanders Capital Partners, said at the time that Bessemer is playing an “increasingly significant” role in the aviation mix in the Birmingham and Tuscaloosa markets.

Jefferson County Commissioner Jimmie Stephens, a pilot himself, said much of the major work at the airport was done prior to national events such as 9/11 and the Great Recession. Those events slowed progress at the airport. Stephens said he hopes the city, county and state can continue working together to grow the airport.

“It’s taken us a long time to kickstart this economic engine for Bessemer and western Jefferson County,” Stephens said. 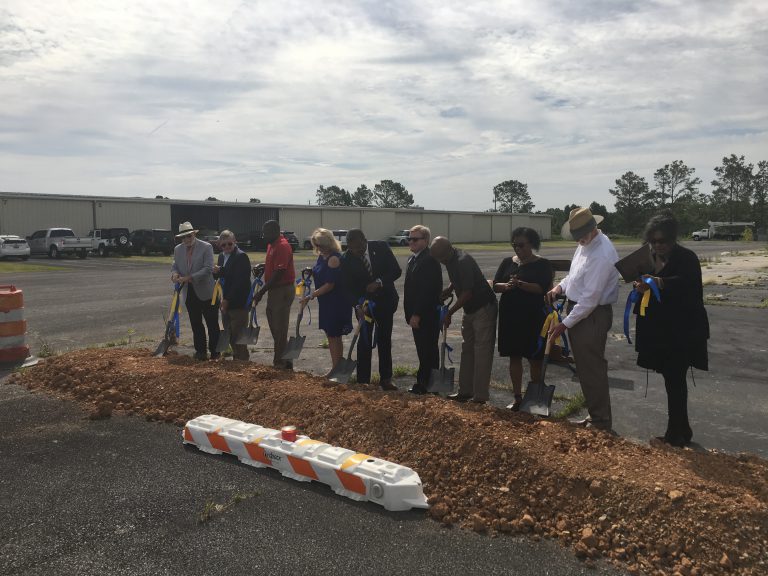 Officials from the city of Bessemer, the Bessemer Airport Authority, Jefferson County, ALDOT and Cadence Bank break ground on a $750,000 hangar project on Tuesday, June 25, 2019 at the Bessemer Municipal Airport.